A new era in deepwater drilling is about to begin. With the sanctioning of the Anchor project super-major operator, Chevron, NYSE: CVX) signaled that it was ready to risk billions tapping the ultra-high pressure, Lower Wilcox Tertiary play, some 35,000 feet below the mudline. At least two other projects are in advanced FID status with several more under review. In this article we will look at some of the key players in this “final frontier” for the Gulf of Mexico, and why they are gearing up to exploit this remote reservoir. We will also look at one we feel is particularly poised to reap the bulk of this activity and the profits that will come from it.

One of the biggest deepwater drillers, Transocean, (NYSE:RIG) notes in an investor packet that in the next few years a number of opportunities could be spun from the success of the Anchor (sanctioned) project and the North Platte and Shenandoah projects (nearing sanction). 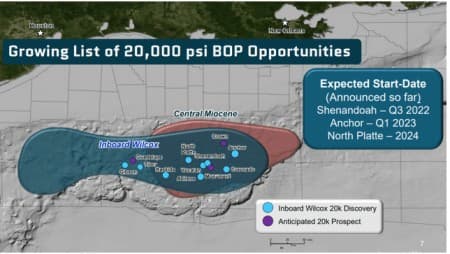 RIG sees a healthy candidate pool for its unique 20K psi BOP drillships, the Deepwater Atlas and the Deepwater Titan. These are the only two rigs with this rating, and probably the only two of these billion-dollar babies that will be built from scratch.

Valaris, (NYSE:VAL) announced in its quarterly conference call that its 7th generation drillship, the DS-11 will be restored from “preservation stack”, and kitted out with a 20K psi BOP. This rig, when properly configured, will be used to drill the North Platte project for Total Energies, (NYSE:TTE), with a 2024 start date. VAL will receive upfront payments for the upgrade and those costs are not included in the $1.3 bn increase in backlog from Q-1.

With only three of these high-specification rigs being planned, compensation should be well above the average ~$225K per day most of the still-active 7th generation drillships are receiving. Here’s what we know.

The value of the Anchor contract is $830 mm and over the 5-year life of the contract amounts to $455 per day. A fairly skinny deal when you factor in the additional capex for the 20K BOP stack and ancillary equipment. It was struck a couple of years ago, in the heart of the downturn. I think future contracts will improve markedly on the announced contract value for Chevron (CVX).

As an indication of progress, we can take the estimated $490K day rate for the Deepwater Atlas for Beacon Offshore’s Shenandoah project. A 4-well deal that was pending sanction news by the end of July. Crickets so far.Related: Peak Gasoline Demand Forecasts Aren’t Scaring Big OilThere is also some discussion about the fact that the end of July came and went without a sanctioning announcement for Shenandoah. I don’t have a seat in the boardroom at Beacon, but I can tell you that this is the hottest thing they have going. If they don’t develop this massive, 1,000′ net pay, light oil interval, with subsea export for the oil to any number of nearby hosts – Jack, Kaskida, St. Malo, Cascade among them, and export of the gas to the Discovery gas plant in Louisiana, I would have to question their raison d’etre.

A brain-child of Blackstone Energy Partners, Beacon was formed in 2016 for the express purpose of developing high-quality oil reservoirs in the GoM. Beacon owns interests in a number of ongoing and pre-FID projects that include Blue Wing, Olive, Buckskin, Claiborne, Crown & Anchor, La Femme, McKinney, Moccasin, Praline, Red Zinger, Shenandoah, Stonefly, and Yucatan. Many of these are just a hop, skip, and a jump from Shenandoah. There is little doubt in my mind that Shenandoah goes forward.